OMG Geeks! Polygon is reporting that multiple sources confirm the development of Marvel vs Capcom 4 – a new entry in the beloved crossover 2D fighting franchise.

MvC has a long-standing rep as one of the craziest and most enjoyable 2D fighters ever and a major part of that phenomenon was the roster. A HUGE line-up of characters from both Capcom’s games and Marvel’s comics created a mind-boggling number of team combinations and hilarious interactions between characters who, normally, would never cross paths. Check out our line up of the 10 Must-Have characters that GWK (or Szpirs, anyways) needs to see in this game.

Capcom is expected to make an official announcement at this weekend’s Sony PlayStation Experience 2016 in Anaheim following a Street Fighter 5 tournament. There are reasons to be sceptical….but it looks like 2017 will see characters like Ryu, Mega Man, and the cast of Resident Evil facing off against the Avengers and company. Now, that’s great news, but there’s a spanner in the works….and it’s got a big, gold ‘X’ on it.

Fans of Marvel comics and films are all aware of the tension between Fox, who controls the Fantastic 4 and X-Men/mutant franchises (plus Deadpool), and Marvel Studios/Disney who control everything else (basically). For the purposes of this Top 10, I’m going to assume that the X-Men are OUT. This is really saddening to think about as a fan of the comics and the MvC games as the X-Men were a huge component of the success of both…however, we have to be a little realistic when discussing a fantasy game where sentient robots and fireball-throwing martial artists fight wizards and Norse gods (unless they’re aliens who inspired the Norse gods and….COMICS).

Netflix’s breakout Marvel shows feature a darker tone and more mature content…but have their roots in street-level tuchus kicking. Picture a powerhouse Luke Cage grappling with Zangief from SF5 or a nimble, technical Iron Fist – already a character in Ulimate MvC3. Now pair that with a dirty-fighting Jessica Jones and tough-as-nails Punisher…all arrayed behind a robust Daredevil…sounds like a must-have to me. Developers may have to tread carefully around likeness rights…but using the comic book versions of these characters with their Netflix personalities would be a good compromise. 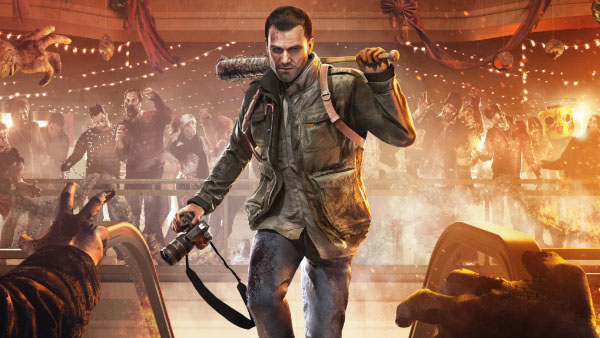 The Dead Rising series is a weird phenomenon. Rooted in an anime’d interpretation of Dawn of the Dead – trapped in a mall, surrounded by Zombies – this series has a sardonic sense of humour that separates it from its’ Poe-faced cousins in Resident Evil. In MvC3, Frank brought this humour to his fighting style by using scavenged objects as weapons – he has a Casey Jones-style golf bag – as well as shopping carts, his camera (he’s covered WARS, you know), and even zombies themselves. More of this in MvC4…and if he could use more of his Evil-Dead-style improvised weapons, that’d be even better.

Back in the heady days of 2011, there was a renewed interest in Peter Parker’s old bully, Flash Thompson. Over the years, Peter and Flash had become good friends…and much needed shoulders to lean on through the deluge of melodrama the Spider-books dumped on them through the 80’s and 90’s. In the modern era, Flash reenlists in the US Marine Corps and fights in Iraq. He returns home with both legs amputated after heroically saving his patrol. The surge in interest in the character led Marvel to take a stupid idea – “Wouldn’t it be so metal if Flash was Venom? But like, with guns, bro?” – and entrusted it to the insane genius of Rick Remender under whose pen, Agent Venom would pair Flash with the symbiotic alien costume in a constant mental struggle for control. When Flash gives in to the symbiote’s cannibalistic urges, he gains enormous power – and the more traditional Venom costume and form – but he sacrifices his compassion and self-control. It would be a rush to see this struggle embodied in the play-style of this character…perhaps changing from the spry, agile Agent form into the lumbering, powerful Venom form when life runs low. 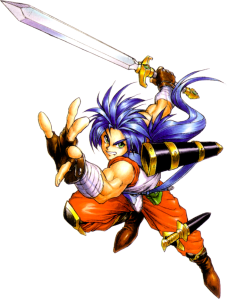 In Capcom’s long running anthology fantasy RPG series, the main character is Ryu – not because of any relationship to a certain wandering street fighter, but because the name means (more or less…) ‘Dragon’. In the BoF games, the name is a little on-the-nose as your main character is actually a dragon – a human who can transform into a flying, fire-breathing (or ice- or lightning- or….) lizard as he unlocks his powers. Each game re-imagined the character rather than acting as direct sequels but my personal favourite is Ryu from 1994’s BoF2 – he’s a cocky, adventurous swordsman who discovers his ancient lineage by accident. He could be a fun, quirky fighter with powerful transformations and breath attacks.

Marvel’s current teen-hero team is pretty exciting. The comic has been garnering great reviews thanks to a lively, diverse, and conflicted cast combined with the energetic visuals of Humberto Ramos. So what do we get with these characters? A heavy hitter in Amadeus Cho aka the Totally Awesome Hulk; a Dhalshim-style stretchy Ms. Marvel; the stealthy, younger Spider-Man (Miles Morales) who could have a count-down sting attack; Viv Vision, the teen robot daughter of, well, Vision who can become insubstantial or super dense (durable or strong for game purposes); and (it pains me to reccomend this one…) the younger Nova – a small, fast high-mobility type who could charge all over the field and use projectile attacks. Yeah, I prefer the original Nova too and there’s no reason not to include him…he was a mainstay for my teams in UMvC3..but NINO’s design is good and having a young, high-energy character is a good fit for this type of game. Sorry Cyclops, X-Men have to sit this one out. 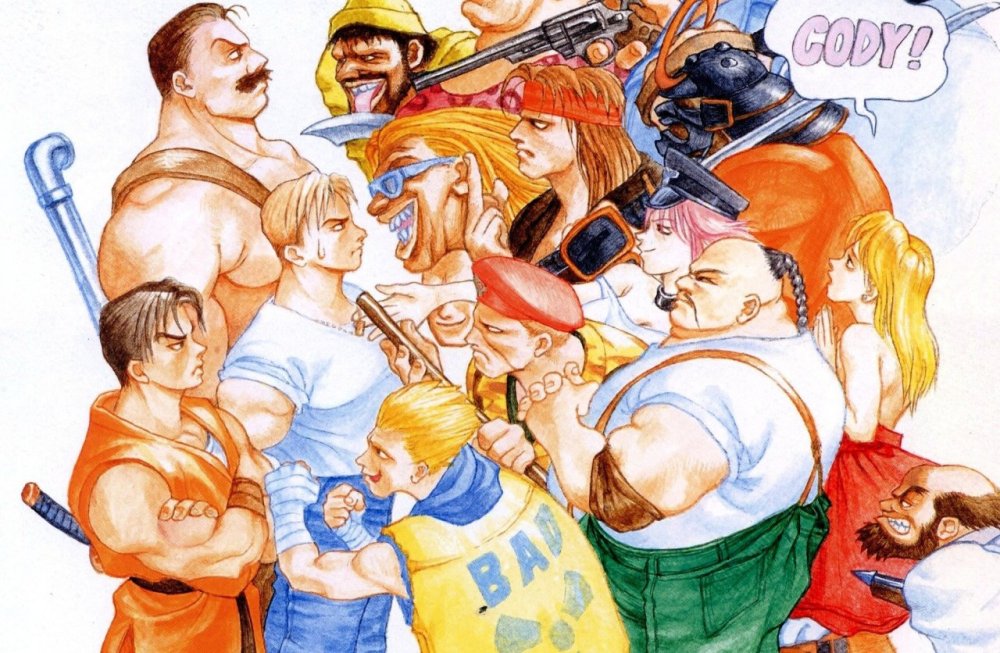 Before Street Fighter 2, one of Capcom’s big arcade-game successes was Final Fight, a side scrolling beat ’em up where you’d choose one of three fighters to battle the Mad Gear Gang with: the towering wrestler/mayor (HAHAHA) Mike Hagar, agile and quick ninja Guy, and the balanced everyman, Cody. These characters were eventually integrated into the Street Fighter universe in the Street Fighter Alpha series where Guy, and later Cody, were playable characters. Hagar was a big hit in MvC3…why not bring the rest of the family with him?

Thor, who’d been a sub-in, one attack helper character in previous MvC games, finally got the star treatment in MvC3 as one of the most versatile characters in the game. He could use his hammer to create projectile attacks, lay down some heavy damage in close quarters, and had some truly screen-filling super-attacks. Bringing this character up-to-date with the comics as the Unworthy Thor would be pretty simple…and visually interesting; however, it would be a painful lapse to exclude the current Thor – Jane Foster. The mobile game Contest of Champions approached Jane-Thor as a smaller, re-balanced version of the original – less damage in her punches but more speed and projectile attacks. Sounds like an easy fix to me…and it suggests some pretty awesome face-off animation when the Thors go head-to-head.

Hey, I like Zero has much as the next guy. Robot with gun-hand and lightsabre? Sign me up…but I can’t think of any good reason why Capcom’s second version of the classic Mega Man has been left out of the party for so long. X is a bit darker than the original Mega Man. It’s no Blade Runner but it has a more involved story than the older franchise and is concerned with the relative humanity of the reploid characters like X and Zero. On a character level, X had Mega Man’s ability to use the attacks of defeated enemies but he added two major features: 1) he could cling to walls and slide down them…or jump up them and 2) he could find armour upgrades that would improve his basic abilities. This led to an RPG-ish mechanic of finding different items to increase X’s life, durability, and weapon power. This could be reflected in a fighting game by having X gain armour pieces as his special meter rises or unlock them through moves (sort of like Juri in SF4 and 5). Look, ever since you found the fireball upgrade in Mega Man X back in 1993, you’ve been waiting to throw that bad boy against Ryu. Make it happen, Capcom! 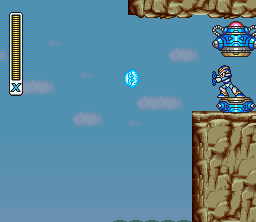 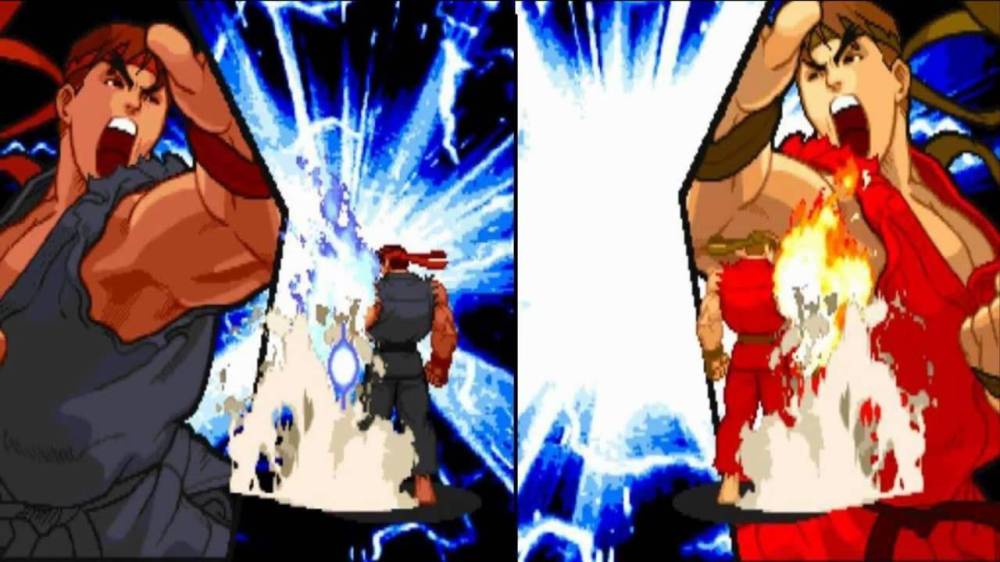 It’s been a long time since the first MvC game…and one of the best features of that game was the introduction of a variable or Complete-Change Ryu. Instead of including all the Ryu ‘clone’ characters from Street Fighter (Ken, Akuma, Dan, Sean), Capcom had Ryu access the abilities of all of them. By using an attack combo, Ryu could switch styles during combat. Although he didn’t use all of the moves from each character, the switching mechanic was a cool twist that made Ryu players less predictable…and it was kinda cool to see Ryu change Gi colours to match each style. Bringing back this mechanic would give Ken and Akuma fans their characters without taking up extra space on the roster.

I like the Ryu idea so much, I’m using it twice. MvC2 offered an alternate costume for Spider-Man in mirror matches…the legendary black costume. Ever since, having a black-costumed Spider-Man has been a feature of the series…but it got me thinking…why not adjust Spidey’s play-style to match the costume. In his classic red-and-blues, Spidey is a quick, mobile character with surprising charges, paralysing attacks (webs), and mid-air grabs. Why not make him a creepy, counter-style character in the black costume (to reflect his more stealthy and up-close approach), a more aggressive, projectile heavy type as Superior Spider-Man, or a more Miles-Morales-style sneak-attacker in the Stealth Suit? Like Ryu, it brings some variety to a popular character and keeps roster space free for other, lesser-known characters.

Well, that’s my wish list…but having the game confirmed on Sunday would be the ultimate must-have. If Capcom can keep the quality consistent with MvC3 and UMvC3, they’ve got my money.

What say you, Geeks? What characters would you want to see in MvC4?