It’s been swell seeing the adventure game genre make a strong comeback.  Telltale Games’ boasts a rather impressive library of titles right now, including Batman, Walking Dead and Guardians of the Galaxy.  Even old favourites are getting the reboot treatment!  So today, let’s pay homage to some of the titles of yesterday that perhaps inspired this resurgence in deep story telling.

I’m going WAY back for this first entry.  Infocom had a rich history of churning out all sorts of text based adventure games, including a very infuriatingly difficult version of Hitchhiker’s Guide to the Galaxy.  My all time favourite text based adventure game is the original Zork.  Set in a fantasy realm that blends some modern elements into it, you, the unnamed adventurer, must seek out the 20 treasures of The Great Underground Empire and return them to the trophy case found in little white house you discover as the game opens.  This game is tons of fun, even though you are without visuals of any kind.  The puzzles are challenging, the descriptions can fuel your imagination, and the humour is akin to what Douglas Adams himself may have written.  This game inspired me in terms of my passion for gaming, story-telling and reading.  The language it uses is high end at times; challenging even.  Yet, it kept me coming back for more, even with a dictionary and paper and pencil nearby to map out my progress.

This is one of the first Spider-Man games I played.  A mix of text based descriptions with stills that look like they were lifted from classic Marvel comics of the 80s era.  The Questprobe series consisted of individual Spider-Man, Hulk and the Fantastic Four (Well…the Human Torch & Thing) adventures.  In it, you must collect either gems or other prizes to win the game.  The villains are plentiful and the puzzles offered some challenges.  Not too expansive in terms of the worlds they inhabit, but enough to keep you feeling like you have stepped into one of the comics.  Just don’t go nova… 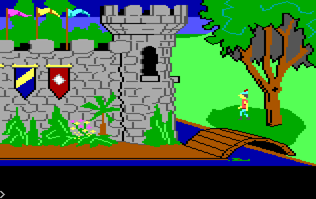 If Questprobe dropped you into the world of Marvel, King’s Quest by Sierra dropped you into the world of fairy tales and fantasy.  Family friendly and full of connections to some of the most well know Grimm tales, nursery rhymes now owned by Disney.  This game still falls back on text entry to navigate most puzzles and quests, but the character can move and interact with their environment, sometimes to quite humourous effect.  This is an easily accessible, gateway game for parents looking to start their kids out on something fun and engaging.  The puzzles are moderate in scope, but even though the game is pushing 23 years old, the retro graphics are colourful and gentle on the eyes.  Recently, a console “reboot” of the game was launched, so if you wish go check it out after playing the original.  You won’t be disappointed. 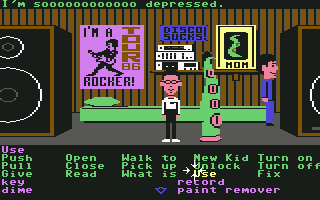 While text entry is still a prominent feature in the advdenture game genre during the late 80s, some games simplified the process by adding point-and-click text options to speed things along.  Enter, Maniac Mansion, a Lucasfilm Game that is a tongue-in-cheek nod to the Rocky Horror Picture Show.  In this adventure the player takes on the role of Dave, the the teenage protagonist, that must rescue his girlfriend, Sandy, from the clutches of the evil scientist, Dr. Fred, who is being held captive inside his stately manor.  This game blends lots of humour, some scares and some more jokes, that sometimes can go a little too far (do not put the hamster in the microwave!).  It’s easy to get into and among most early adventure games has tons of replayability thanks to the option of selecting two other playable characters to tag along with Dave, each with their own unique skill set (not the Liam Neeson style unique skill set).  Depending on who Dave brings into the adventure with him, alters how you can win the game.  Well done, Lucasfilm Games! Of all the Sierra adventure games released through the 80s, this was my favourite series.  Quest for Glory is King’s Quest with an RPG element blended in.  The original two games in this series made use of the text entry fields, but later dropped it in favour of the point and click interface that started gaining popularity in the 90s adventure games.  In this game, you play a hero tasked by Baron Spielburg to find his children, stop the brigands and save the realm.  What sells this game is the fact that you can play as one of three classes; thief, fighter or magic user.  Depending on your class, you can finish the game in several unique ways.  The RPG elements come in to play in solving certain quests.  Some times you are grinding it out to build your stats, but once you level up the game takes off.  Again, it blends fairy tale elements with DnD monsters and puzzles.  High replayability AND you can import your character into each sequel and continue to build them into the greatest hero in the world.

In a world where motorcycles are a dying breed…greed and corruption reign…one man…stands up for what is right…by using his fists and his bike!  Full Throttle, in my mind, is the last great adventure game of the 90s.  As a game, it was way too short, but as a promise of something bigger and almost Mad Maxian, it created such a rich environment I so desperately wanted to come back to.  The action game elements fit in nicely with the adventure and narrative.  Even though it’s lean, this game boasts some of the best characters ever encountered in the genre.  They are compelling and almost alive in their highly stylized, animated world.  In addition, you get a game with one of the best soundtracks and some of the best voice acting to date, including Mark Hamill as the lead villain…which, sometimes, you can hear the Joker slip through.  It’s ironic actually…the game focuses on how Ben Throttle is trying to save the last symbol of freedom in his world, the motorcycle, all the while the game itself is foreshadowing the death of the adventure game genre, soon to be replaced by the highly marketable, first person shooter genre of the late 90s, 2000s.  As the sun dips over Ben’s world, so does it set on the adventure games…only to rise again…!  PS – Stick around during the end credits for some amazing Motorcycle Haiku!

WHEW!  With so many games to choose from, I thought this was a good list to get started with.  I’ll do a part two because I still have a ton to hit upon (Below the Root, Monty Python’s Quest for the Holy Grail, Space Quest, Day of the Tentacle, etc).  Any others that bear mentioning?  Let me know and I’ll give you a shout out on the next Throwback Thursday Adventure Game Round Up!