Magic Brothers (not actual brothers) Devon and Stew sound the alarm about rumoured card bans coming down this week… er… eventually… maybe. Devon breaks down the dominant decks in Standard. Szpirs hazily recalls earlier bannings and asks: what needs banning in today’s game? Does anything? Have your say, Geeks, in this week’s Magic Monday. 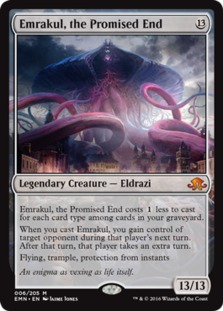 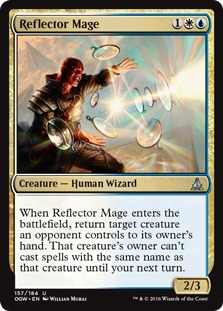 Szpirs: Why is this happening? What did we do?
Stew: Sometimes a card or group of cards will be so overpowered (OP) compared to the rest of the playing field that wizards has to step in and make changes. That always comes about when one combo or one card throws off the meta of the game. Skullclamp vs affinity is a good example.
Szpirs: I remember that…during the first Mirroden block, every deck in the top 8 was a minor variation on the same two or three cards. Since just about everything in the block was artifact, it was easy to use the Affinity mechanic to bring out permanents very quickly…then sacrifice them to the Arcbound Ravager for a ridiculous swing. Combined with cards like Disciple of the Vault and Skullclamp, a player could out-draw and out-punish an opponent out of the game in 3-4 turns. So, Wizards banned the key card or cards from those decks forcing players to rethink and, hopefully, build a wider variety of decks.

Stew: Correct. They will either restrict a card to only one copy per deck, like Brainstorm in Vintage, or ban a card outright as its way too powerful like Skullclamp.
Szpirs: Are we back in that territory now? I was only playing casually during Mirroden but I’ve read that the Standard environment wasn’t the best then.
Devon: Sorta. The main similarity is that there are only two (maybe three) competitive decks in Standard.
Szpirs: Can we break them down easily?
Devon: Sure. Saheeeli Copycat is a two card combo: Saheeli Rai and Felidar Guardian. Saheeli is a planeswalker with a -2 ability that creates a token copy of target permanent. It gains haste but you must exile it at end of turn. The cat is one white and 3 colourless. When it enters the battlefield (ETB), you exile target permanent then return it to play under its owner’s control. 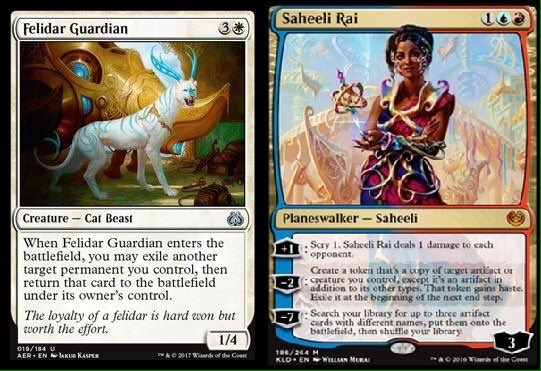 So, let’s say on turn three you play Saheeli and she resolves. You can use her +1 ability and pass the turn. Your opponent does their thing and it’s your turn again. You play your cat and it resolves, so you flicker Saheeli. She enters and you trigger her -2 ability which makes a token of the cat. It ETB’s and flickers Saheeli again. She enters again and is treated as a new casting of the card so you can trigger her -2 AGAIN to make another cat token. Repeat till you have reached crazy-cat-lady status and swing for the win because the tokens have haste.
Szpirs:

Devon: Mardu vehicles is at its core an aggro/control deck. Swing often (Toolcraft Exemplar, Veteran Motorist,  Heart of Kiran, Gideon, Ally of Zendicar, Aethersphere Harvester) and use control to clear the way (Unlicensed Disintegration).
B/G Constrictor uses Winding Constrictor to accelerate production of counters on you, your creatures, and artifacts.
With the current state of standard, a simple banning won’t do much. There’s just too many ways to exploit the pieces of these combos.
Szpirs: What if you guys were at WotC? What would you ban out of standard right now?
Stew: I’m not sure. Standard isn’t the format I follow as much as Vintage, Commander and Legacy. For Commander, I would do Aetherflux Reservoir as I’m seeing it played in almost all decks and it can get ugly quick. Gain eleven life and win the game? Yeesh.

Devon: I agree. It’s too easy to abuse, especially in one on one.
Stew: And Vintage won’t change until they see the Eurupean Vintage tourney results. I doubt there will be much impact if anything is banned at all.
Devon: In Standard, having two or three top decks seems pretty normal considering the smaller pool of cards to deal with. That said, the two card infinite cat combo really needs to be watched. Right now, I feel that despite its potential to end a game turn four, you still have both time and options to respond to it. If I’m the boss of Wizards, I don’t think a ban is needed at this time. But when Amonket drops, we may need to reevaluate.
Mardu Vehicles and B/G Constrictor are, I feel, easy to sideboard for and bans would be silly.
The last round of bans, when Emrakul, Reflector Mage and Smugglers copter were removed, were completely justified. All of those cards were far to easy to abuse and had limited responses.
Stew: I agree, in part. I had no issue with the copter; it’s a 2 drop Mox that becomes a creature (rarely) and I would of used them the same way.  I’m thinking about using it in Legacy as it seems half decent.
Devon: I see your point. Of those bans, that is the one that bothered me most. It felt like they just nerfed it because the other two top decks got hit; however, its’ banning seemed to put Mardu’s tempo back in line with the other decks that fill the top tier void.
Damn, I want to play now.